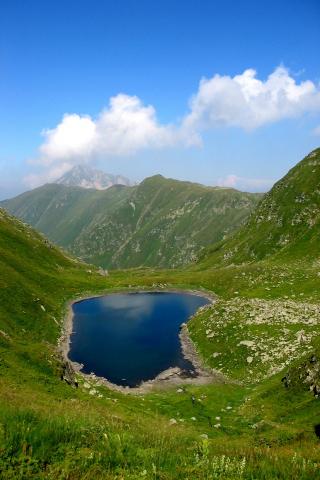 Description:
At the southern tip of Serbia, along the border with neighbouring Macedonia, the Sar Mountain range rises upwards. These unusual mountains of wild and harsh beauty, with about a hundred peaks exceeding over 2,000m/asl, are the water-rich Balkan mountains, with streams flowing into three sea basins, with rich and diverse flora and fauna and a large number of endemic species. With such diversity the area has now been declared a national park. Sar Mountain is like a glacial museum under an open sky. The colliding of Mediterranean and continental climates along these high peaks has led to the occurrence of differing microclimates. While the foothills and valleys of the Prizrenska Bistrica and Lepenac rivers enjoy a warm Mediterranean climate, on the highest peaks it is cold and harsh, truly alpine, with snow cover present for up to 280 days a year. It is not rare for all four seasons to be felt during the course of a single day on Sar. All these features of Sar have led to an unrivalled richness of flora and fauna. Special treasures of Sar’s plant life include a number of local endemic species, among them the King Alexander’s Yarrow, Bornmuellerantha, Sar Mountain Crocus and the Sar Mountain Carnation. The peculiarities of the National Park include: Narthecium scardicum, Burnet Saxifrage, Macedonian oak, yew, Macedonian and Bosnian Pines. The forests of oak, beech and fir, high-altitude shrubs and herbaceous plants are home to 147 species of butterfly, which is why Sar Mountain has been declared among the wealthiest such regions of Europe. than 200 species of birds complete the mountain’s living world. The area is also well known for its authentic of dog: the Sarplaninac - Yugoslav Shepherd Dog - famous for its courage, strength and endurance. All of the lakes located in the Sar Mountains, are a result of glacial erosion. They lie in cirque, recesses that once housed mountain glaciers. They are known for their beauty by the name ‘mountain eyes’. Depending on weather conditions, all lakes can be covered with snow and ice from November to May. There are a total of seven lakes: Livadicko, Lower Blatesticko, Upper Blatesticko, Large Vir, Small Vir and the Minor and Great Jazinacko lakes. These completely clear and icily beautiful lakes do not offer pleasant living conditions and, as such, only Livadicko Lake and Great Jazinacko Lake are brought to life by the introduction of brown trout, which are unable to reproduce here because of the harsh living conditions.The cultural and historical heritage of the Sar Mountain National Park is characterised by its abundant and diverse nature and the area represents special significance to the Serbian identity and the country’s national history. In addition to medieval fortresses, villages and bridges, there are 45 Serbian medieval churches and monasteries, such as the 13th century hermitage of Saint Petar Koriski or the 15th century St. Archangel Monastery in the Prizrenska-Bistrica Canyon near Prizren – the medieval Serbian capital city at the foot of Mount Sar.
Audio record: