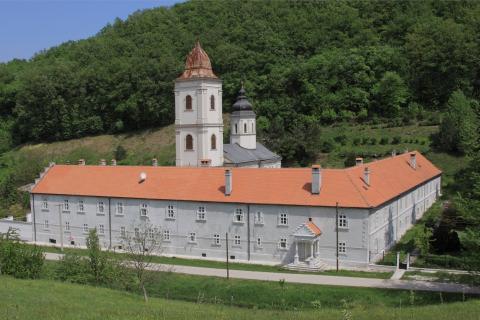 Description:
It is unknown when the monastery was established. In the Turkish censuses, it appears for the first time in 1566-1567, when it had a small single-nave church, which is supposed to have been erected under the influence of traditional architecture. The monastery was damaged and deserted in the Austrian-Hungarian wars, only to be renewed in the period 1697-1699 by the refugee monks of the monastery of Rača, who built a temporary church from wood in 1708. Today’s big church was built in the period from 1732 to 1740, whereas the three-floor bell tower with a porch in front of the western façade was finished in 1762. The monastery residences, built between 1728 and 1771, encompass the church from the southern and the western sides. The thorough reconstruction of the monastery compound was conducted in 1893, and minor changes were made in 1921. The iconostasis of the monastery church was made by Dimitrije Bačević, Janko Halkozović and Teodor Kračun, in the 1750s and the 1760s. Of the wall paintings, only one composition painted by Janko Halkozović in 1782 has been preserved. Simultaneously with the building of the church, the old chapel, whose iconostasis was made in 1739, was built. The present chapel was built in 1905, according to the design made by Vladimir Nikolić. In the Second World War, the monastery was plundered, whereas the buildings remained undamaged.
Audio record: