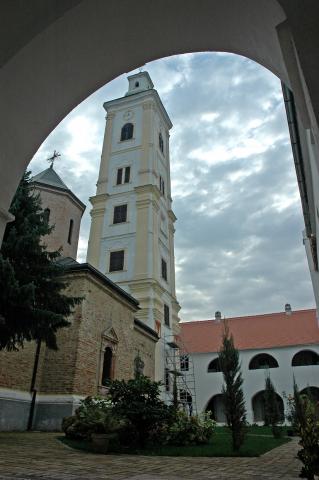 Description:
There is a legend relating the monastery to King Dragutin, but it is more likely that it was erected around the end of the 15th century or in the first decades of the 16th century. There is a reliable record of the monastery under the name of Velika (Great) Remeta Monastery in 1562. The church was constructed as a single-nave building with a dome with a narthex, to which a baroque-style bell tower was additionally built in 1735. The outside and the inside of the church were icon-painted from 1567 to 1568. The fragments of the iconography have been preserved in the niches on the façade and the alter. The monastery residences, which encompass the church from the four sides, were constructed from 1722 to 1771, and the renovation works on the façade of the church, which was aligned with the baroque-style bell tower, were performed from 1733 to 1753. The data about the painting works on the iconostasis, which was disassembled in the Second World War, have not been sufficiently researched. The iconostasis represented a set of icons from different times, and the composition originates from 1850, while the church was being renovated. The most significant icons from the throne zone were painted in 1687 and are the work of iconographers of Moscow. After the demolition of the monastery in the Second World War, it was renewed on two occasions, and the church was made richer for one new dome in 1982.
Audio record: