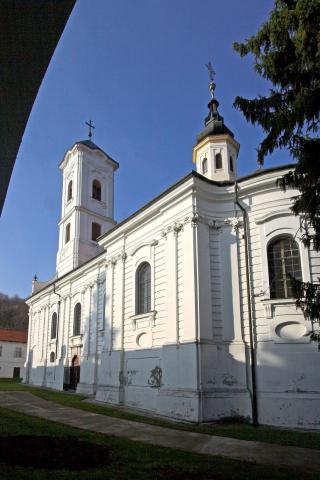 Description:
The exact time when the monastery was founded has not been determined. The sources from the first half of the 18th century testify to the fact that the church was erected in the time of Serafim the Metropolitan of Belgrade and Syrmia in the second half of the 16th century. The reliable data about the monastery originate from 1566-1569. In the reconstruction of Vrdnik, which was performed by the monks of the Monastery of Ravanica in Serbia (1697), the old late-mediaeval stone church with the basis in the shape of a cross and with a wooden bell tower was renewed and the relics of Prince Lazar, which the refugee monks of the monastery of Ravanica had brought with them when they had come there from Szentendre, lie in this church. The monastery has been called Ravanica, too, since that time. Today’s classicistic church was built between 1801 and 1811, and two years later, the old church was pulled down and a stone cross was placed where the church had once been. The icons on the iconostasis of the old church were painted in the zographic style by Stanoje Popović in 1743. The paintings of the iconostasis of the new church and the wall paintings on the arches were painted by Dimitrije Avramović in 1853. In the Second World War, the monastery was not damaged but all the things from the residences were removed.