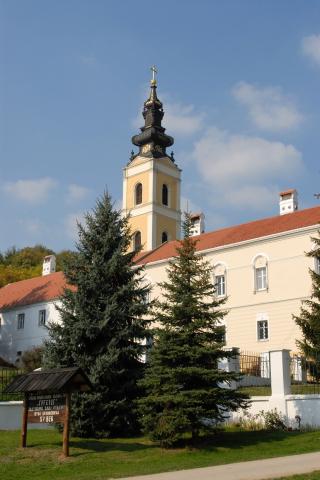 Description:
According to a legend, the monastery was founded by Vuk the Fiery Dragon in 1470. The first reliable data originate from 1545-1546. The monastery had been depopulated prior to the Great Migration, and was renewed by the Metropolitan Isaija Djaković in 1708. The old stone church in the shape of a triconch was replaced with a church in the shape of a cross in the baroque style in the second half of the 18th century (around 1770). The new church was renewed between 1898 and 1901, following the designs made by Herman Bole, an architect from Zagreb. The monastery residences, erected in the 18th century and encompassing the church on all the four sides, were also renewed then. The old brick iconostasis, the work done by Jakov Orfelin from 1772 to 1774, was pulled down during the renovation of the monastery. In the renewed church, the iconostasis was painted by Uroš Predić from 1901 to 1902. In the Second World War, the monastery was severly damaged, and since 1953, it has gradually been renewed. The conservation-restoration works are still in progress, as well as the final works on the construction of a new bell tower.