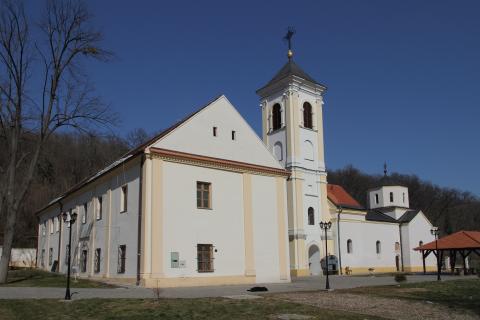 Description:
According to a legend, the monastery was founded in the late 15th century by Despot Jovan Branković. The first reliable data in the Turkish sources originate from the second half of the 16th century. The monastery is assumed to have been deserted in the 17th century, and in the early 18th century, it was mentioned as Kuveždin monastery’s estate (metokhé). The old and uncared-for ecclesiastic building, whose basis is in the shape of a cross, was renewed in 1744 thanks to the ktetorship of Petar Jovanović, an inhabitant of Novi Sad. The major changes on the church were performed from 1762 to 1764, when, thanks to the ktetorship of Matej the hermit, a new narthex with the bell tower was built, above which bell tower a chapel dedicated to the Mother of God was constructed. During the time of the baroquization of the church, the monastery cells were thoroughly renewed and modestly built. The iconostasis of the renewed church was painted from 1753 to 1754 by Teodor Stefanov Gologlavac. From the beginning of the First World War to 1922, the monastery was deserted, only to later be renewed. In the Second World War, the iconostasis was severly damaged, disassembled and removed (partly preserved). Since 1980, the monastery has been populated and is gradually being renewed.