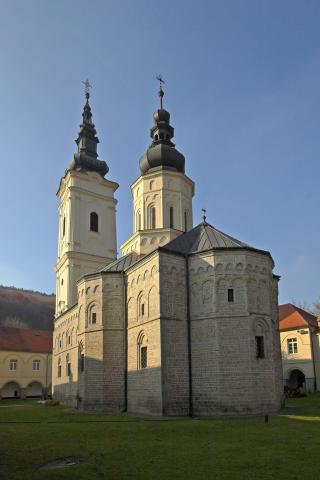 Description:
The monastery was founded in 1736, thanks to the ktetorship of a group of offertory givers, the inhabitants of Novi Sad, Baja, Osijek, Šid and Šašinci. The construction of the church with the traditional and architectural shapes in the basis and the manner of construction lasted from 1736 to 1758; however, as early as in 1741, the church was prepared to accommodate the brotherhood. Next to the western side, a baroque-style bell tower was built, and its building ended in 1803. The monastery residences surrounding the church on the three sides were built in 1736 and 1761. The icons on the baroque-style iconostasis were painted by Dimitrije Bačević and his associates in 1769, and in the following decades, the picturesque thrones with the same stylistic characteristics were made. Under the icon of the Most Holy Mother of God framed into the massive throne, the relics of St. Anastasia of Rome lie, which Prince Lazar was given after his visit to the Holy Mountain. In the temple, the relics of Tsar Uroš the Weak are preserved. The general reconstruction of the monastery was performed between 1926 and 1930. During the Second World War, the monastery residences were burnt to ashes, and now they have been renewed. The church remained undamaged.