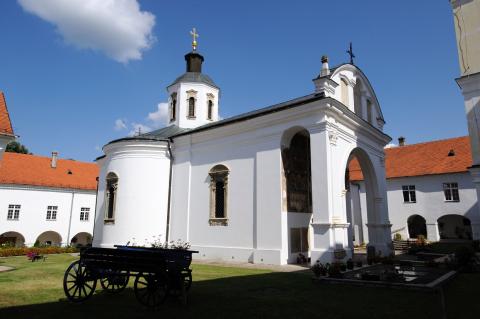 Description:
The monastery was built in 1509 by Bishop Maksim (previously Despot Djordje Branković), with the help of Mother Angelina and the Wallachian Duke Jovan Njagoj. During the ultimate withdrawal of the Turks from Syrmia in 1716, the monastery was damaged and the church was burnt to ashes. The works on the renewal began in 1721 and were brought to an end around the end of 1760. In the period from 1750 to 1751 and in 1756, the parts of the inside of the temple were covered with a new wall iconostasis, and the masters who painted the frescoes of Krušedol were most probably the Greeks from the Holy Mountain. The iconostasis was formed from the icons originating from the different times and style. The line of apostles with the Christ in the middle is the work done by the masters of Crete and belonged to the original iconostasis from the first half of the 16th century. The painting of the Crucifixion with the accompanying icons and The Watching Eye originate from 1653, whereas the remaining four icons and the painted gate originate from 1745. The most recent are the icons in the socle, painted in 1828. In the Second World War, the monastery was not destroyed, but its rich sacristy was pillaged. The whole of the monastery compound has been renewed.
Audio record: