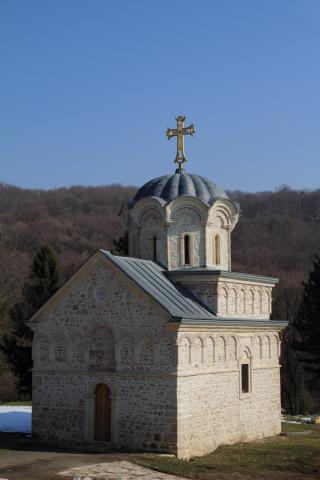 Description:
According to a legend, the monastery was founded by Djordje Branković, the later Bishop Maksim. The reliable testimonies related to the monastery originate from the period 1545-1546. During the 17th and in the first half of the 18th centuries, there was no record of the Old Hopovo. Only on the basis of the data from 1751 is it possible to see that until that time, the monastery had had a church, dedicated to St. Nicholas, with the walls made from timber. Instead of this church, which was demolished in an earthquake, today’s church, dedicated to St. Pantaleon, was erected in 1752. The picturesquely engraved iconostasis of the single-nave church with a dome was painted by a painter from Irig by the name of Jefrem Isajlović in the period 1793-1800. The iconostasis was damaged and disassembled during the Second World War, and the icons were relocated to one of the Irig churches. Since 1955, all the icons, except for the throne ones, have been preserved at the Provincial Bureau for the Protection of Cultural Monuments, where they have been conserved as well. The conservation-restoration works on the church are in progress.