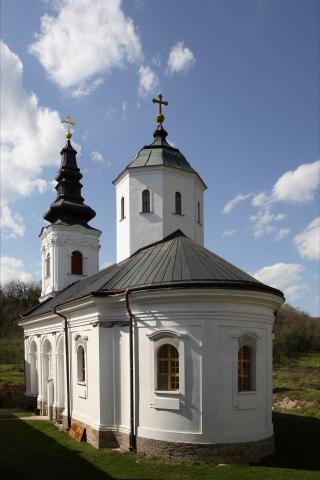 Description:
According to a legend, the monastery was founded by Stevan Štiljanović. The first certain data about the monastery originate from 1566-1569. The original cross-shaped church with two domes, which was built by builders from the coastal area, was replaced in 1816 with a new, classicistic church, whose bell tower had previously been built in 1803. The trilateral buildings of the monastery residences, built during the 18th century, were given their final shape in 1810. The iconostasis of the old monastery church, Janko Halkozović’s work from 1772, was bestowed to the church in Opatovac in the first half of the 19th century. The iconostasis and the wall paintings in the new church were painted by Pavle simić from 1848 to 1853. The chapel in the baroque style in the monastery’s cemetery was erected in 1788. In the Second World War, the monastery with the church was destroyed and devastated. The icons on Pavle Simić’s iconostasis are in the cemetery chapel. The monastery church is still demolished, whereas the residences have been renewed.