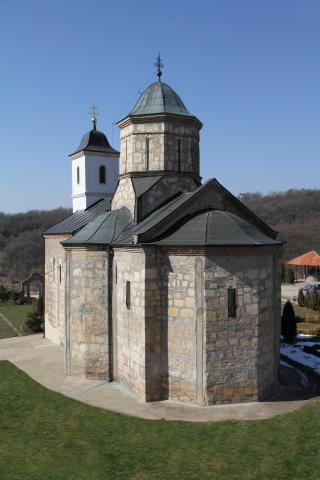 Description:
According to a legend, the monastery was founded by Stevan Štiljanović’s widow, Despotess Jelena. The first certain mention of the monastery originates from 1566-1567. The church in the shape of a contracted triconch has preserved its almost unchanged shape to date. Only the original wooden bell tower was replaced with the built one in the second half of the 18th century. The data about the monastery residences have remained unexamined. The church was fresco-painted in 1588, have for the most part been preserved until now. In the 18th century, the church was renewed on several occasions, and in 1735, it became richer for a new iconostasis with a big engraved cross. During the Second World War, the church was deserted, and the remaining icons were removed and cleared away. The iconostasis was destroyed, and the cross was moved to the Syrmia Museum in Sremska Mitrovica (Syrmium). The renewal of the church and the cleaning of the painted frescoes were performed in 1950-1952, whereas the conservation works continued in 1981 and have been performed until today.