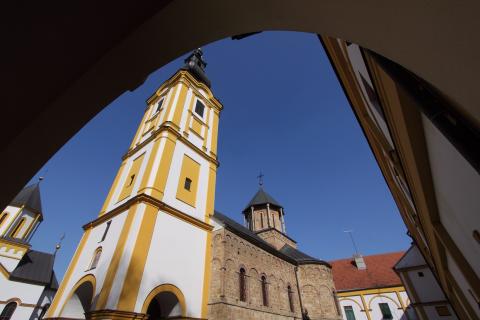 Description:
According to a legend, the monastery was founded in the 12th century by Priba (Priva), after whom it was named. According to another, more acceptable legend, the monastery was founded by the Branković Despots of Syrmia around the end of the 15th century. The first certain data about the monastery were recorded between 1566 and 1567. In the place of an old simple ecclesiastic building, the present church in the shape of a developed triconch was built following the example of the Temple of New Hopovo between 1741 and 1760. The residences of the monastery were built between 1753 and 1771, whereas their present shape originates from the second half of the 19th century. The zographic icons on the old iconostasis of the church were painted in 1747 by Stanoje Popović. The icons on this iconostasis, the thrones and the wall paintings in the central part of the church were painted from 1786 to 1791 by Kuzman Kolarić. The church with the residences remained undamaged in the Second World War, and the sacristy with the library and the archive was removed and partly burnt. The conservation-restoration works are in progress.
Audio record: