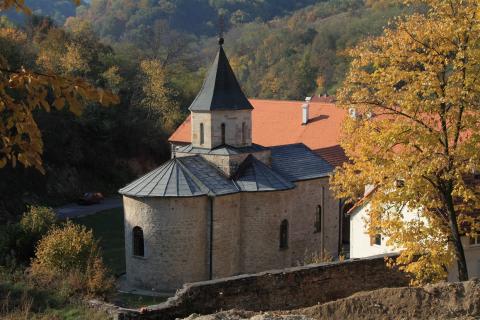 Description:
According to a legend, the monastery was founded by Raka Milošević – Despot Jovan Branković’s Great Chamberlain, after whom it was named. The reliable data about the monastery originate from no sooner than 1545-1548. The monastery church is assumed to have been built prior to the ultimate Turkish conquests in Syrmia in 1526. The monastery was severly damaged in the Austrian-Hungarian wars around the end of the 17th century. When the bell towers in the baroque style was additionally built to the western façade of the church in 1735, certain changes in the ecclesiastic construction in the form of a triconch and the monastery compound in general were made. The final three-sided form of the monasteries originates from 1771. The church was fresco-painted around the end of the 16th century, whereas only fragments and the Christ Pantocrator in the calotte of the dome have been preserved. The icons on the baroque-style iconostasis were painted by Vasa Ostojić in 1763, and the wall paintings in the refectory of the residence were painted by Amvrosije Janković in 1768. The single-nave cemetery chapel is dedicated to the Mother of God. It was built in 1751 and it preserves the iconostasis painted by Janko Halkozović and Vasa Ostojić. The monastery was severly damaged in the Second World War.