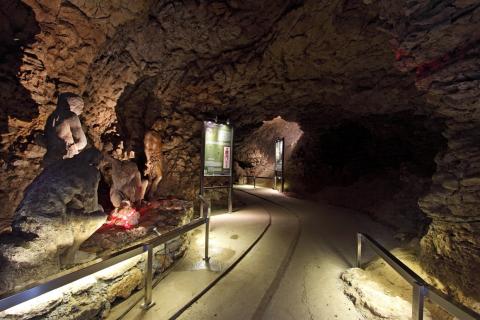 www.risovackapecina.rs
Description:
The only traces of the life of Palaeolithic people found to date are in Risovac and Gradac Cave near Kragujevac. This physical evidence confirmed the assumed existence of Palaeolithic culture to the south of the Sava- Danube line and provided new information on the life of prehistoric people. At Risovaca, located in the very centre of Arandjelovac, shaped flint and bone tools were discovered at a depth of 1-1.75 metres. These artefacts had been made in such a way as to suggest that they were the works of troglodytes from the end of the Mid-Palaeolithic period. Their creator has been dubbed Risovaca man - homo sapien neanderthalensis, a rational being and excellent hunter who mastered fire, shaped tools and buried his dead. Unfortunately, the remains of Neanderthal skeletons have not been found because, along with the richest cultural layer in areas of human habitat, they were destroyed during quarrying. Excavations at Risovacka have revealed numerous fossilised remains of animals, including more than 20 species of mammals: cave bear, cave lion, cave hyena, wolf, fox, wild horse, steppe bison, wild boar, badger, mole rat, beaver, hare... Today Risovaca Cave is home to many species of bats that are endangered and fall under strict protection controls.
Audio record: