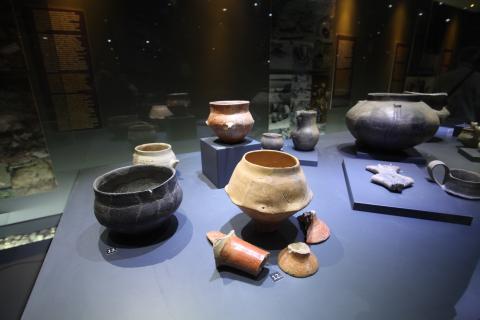 Description:
On the Danube’s right bank, 14 km down the river from Belgrade, there is what is often referred to as the “cradle of the first Europe” – the prehistoric settlement of Vinča. The Vinča culture, which spread throughout the Balkans between 5500 and 4000 BC, was named after this settlement. Vinča is not only important as it represents the most sumptuous Neolithic culture on these territories but it is also the highest reach of prehistory in Europe. As an urban environment, with regularly arranged streets and buildings, the settlement had a large number of craftsmen and traders which gave way to a rich, artistic legacy of production and as such, Vinča alters our very comprehension of prehistory. Vinča people had knowledge of mining; they mastered the production of copper and used it for making axes and ornaments; they produced richly decorated ceramics and unusual figurines of female deities and they used linear script, which is considered to be one of the oldest known scripts. A portion of the enormously rich Vinča culture is exhibited at the Museum in Vinča today, as well as at the National Museum in Belgrade.
Audio record: