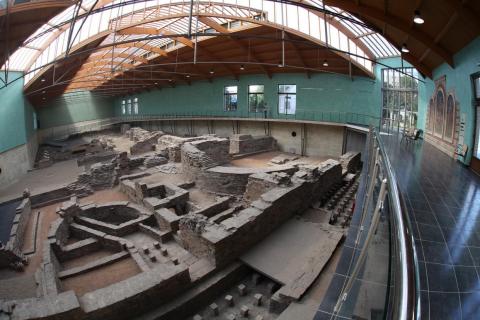 www.carskapalata.rs
Description:
Sremska Mitrovica, town 75 km from Belgrade, lies on the foundations of an ancient Roman town – Sirmium. Having been established at the intersection of the river and overland roads, the settlement of Sirmium developed into one of the biggest metropolises of that time. As early as in I century A.D., Sirmium was one of the main centres of the Roman army, only to later become a big and rich trade city, the capital city of the province of Pannonia and, ultimately, one of the empire’s residences. Emperors Decius, Probus and Maximinus were born there and Theodosius was crowned emperor there. The settlement was belted by defensive walls and there was a port on the river Sava. In III and IV centuries, Sirmium was a luxurious town, with a square in the centre of the town, wide streets, public bathing establishments and palaces richly decorated with mosaics. Today, the remains of the emperor’s palace, the Christian basilica, the aqueduct, the granary, the racecourse and the colonnades can be seen in the town centre of Sremska Mitrovica, while frescoes and mosaics are exhibited at the Museum of Srem in Mitrovica. Sirmium Emperor’s Palace Archeological Site Phone: +381 22 621 568, 618 817
Audio record: