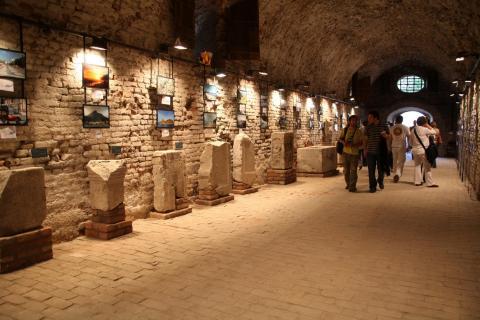 Description:
The Roman past of Belgrade began in I century B.C., when Singidunum – a Celtic fortified settlement – was conquered. Singidunum was a city greatly significant for the defence of the Danube Limes which had been built on the foundations of a military camp that had been raised at the estuary of the Sava and the Danube rivers and at the intersections of the roads connecting the provinces of Moesia, Pannonia and Dalmatia. Singidunum was given the status of a free Roman city and was the permanent residence of Flavius’ IV legion. It is almost impossible not to find a trace of the Roman era in the old city of Belgrade. Kalemegdan preserves the remains of the Roman castrum, the aqueduct, a cistern and a graveyard, while underneath Belgrade’s pavements, priceless archeological treasures lie. At the Roman Hall of Belgrade City Library, parts of a Roman fort can be seen; a collection of gravestones are exhibited in the underground tunnels of Barutana (Engl. Powder-works), and a collection of ornaments including dishes and pieces of art are kept at the National Museum and the Museum of Belgrade City.