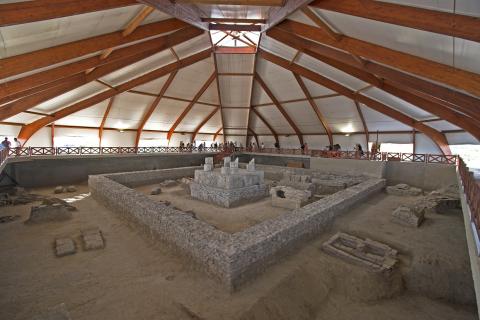 www.viminacium.org.rs
Description:
Not far away from Požarevac, city 82 km from Belgrade, there are remains of the Roman Viminacium, one of the first military camps on the river Danube, which was transformed into an important city for the duration of II century A.D. During the boom days, Viminacium was one of the major Roman cities in the Balkans. There was almost no Roman emperor who did not visit the city. It was the main military centre towards the eastern border of the empire, a trade centre, a city where money was minted and was the capital city of Upper Moesia province. The very well preserved remains of a spacious amphitheatre, public baths, the aqueduct and necropolises are all the testimonies of how glorious the Roman Viminacium used to be in its heyday. The ornamentation and cookware found in tombs are in part, exhibited at the Museum of Požarevac, and partly, at Belgrade National Museum. Today, Viminacium is a scientific-research centre which is being turned into an archeological park and a unique tourist attraction with an authentic Roman ambience where tourists can also join the excavation teams by prior arrangement. Viminacium – a Roman city and stronghold Phone: +381 62 669 013
Audio record: