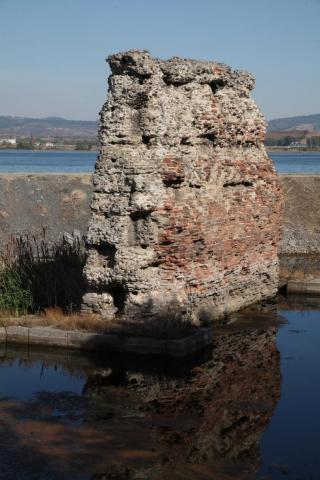 Description:
The remains of Trajan’s Bridge on the Danube River and the Roman Castrum of Pontes are located in the vicinity of the village of Kostol, 5 km away downstream from the town of Kladovo. Erected between 103 and 105, the Bridge is a work done by the Syrian architect Apollodorus of Damascus. On the right-hand side, i.e. the Serbian side of the river, there are the remains of the four brick pillars, once connected to each other with an arch, whereas the part of the bridge across the riverbed was bridged with the wooden grid construction that leaned against the brick pillars. Simultaneously with constructing the bridge, for the purpose of defending that bridge, the military fortifications of Pontes, on the right, and Drobeta, on the left riverbank of the Danube were also erected. Pontes, approximately of a square base, served its purpose of defending this part of the limes all the way to the 6th century. Apart from the basic castrum posts – the ramparts, the towers and the gates – the archaeological research studies determined the plan and the locations of the objects inside the ramparts and a fact was established that, in the early 4th century, together with changes in the Roman army, a new concept of the interiority of the Pontes was being created. Inside the ancient fortification, as well as in the space outside it, mediaeval settlements and necropolises with the strata were formed in the period of the 4th-10th, the 11th-12th and the 14th centuries. The protective archaeological excavations and conservation works began in 1979, within the construction of the “Djerdap II” Hydroelectric Power Station. In order to protect from an increased water level of the Danube, the remains of the access parts of Trajan’s Bridge are protected by a cofferdam. The underwater archaeological research studies of the remains of the bridge began in 2003.