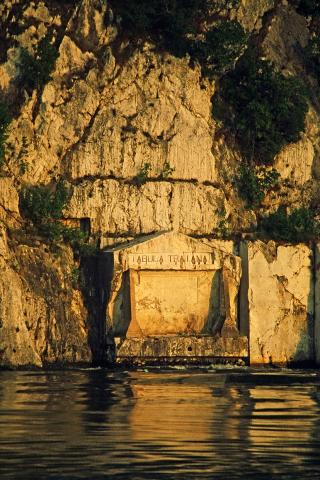 Description:
During his invasions of Dačani (between 101 and 106), Emperor Trajan performed a series of incredible architectural feats in the space of Djerdap. He built the Via Traiana road to Dacia, today’s Romania. The traces of that road are visible today, too, as well as the letters carved in stone, Tabula Traiana (Trajan’s Memorial Plaque), telling of the cutting-through of the road straight through the rocky coast. The emperor’s letters preserved near the fortification of Dijana which safeguarded the canal, testify about the second feat Trajan performed, namely his construction of a canal to ensure safer sailing. The construction of Trajan’s Bridge on the River Danube in the vicinity of today’s Kladovo, 260 km from Belgrade, was considered to be an architectural feat performed by famous Apolodor the Damascene. Being the biggest one of that time, with 50 pillars and a length of 1 kilometer, the bridge brought glory to Emperor Trajan, and helped him to conquer the new province. Even today, the remains of the 1900-year old pillars of Trajan’s Bridge, next to which there is the fortress of Pontes, are still visible.