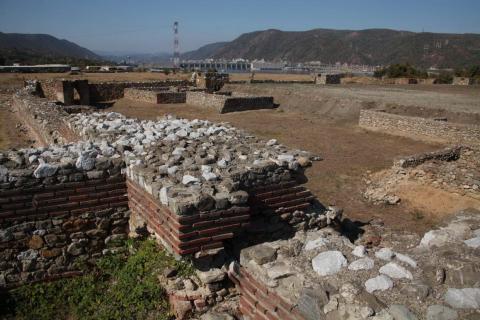 Description:
The Roman Castrum of Diana was built on a high rock above the Danube, Karataš, near the village of Sipa, in the vicinity of Kladovo. The construction of the earliest earth-wooden fortification is connected to the arrival of the first military formations on the Danube river early in the 1st century. The stone fortification of greater dimensions (140x136 m) is connected with the constructing activities performed by the Emperor Trajan and was brought to an end at the same as the cutting-through of Sipski Channel (in 101), which eliminated the biggest of all obstacles to sailing down the Danube. The final appearance, when the dimensions of the fort are concerned, was created in the late 3rd and the early 4th century, by the addition of the ramparts going from the corners towards the Danube, thus closing and protecting a part of the riverbank. In the mid-5th century, it was destroyed by the Huns and around 530, it was renewed by the Emperor Justinian. The fortification was also destroyed in the time of the Avar-Slavic raids in the late 6th and the early 7th century. The extraordinary archaeological material (the diverse objects for daily use, the marble and bronze sculptures) indicates that, apart from its role related to the protection and defense of the channel, there was also a significant economic center with the harbor and the piers on Diana during the six centuries. Apart from the remains of the rampart with the gates and the towers, the construction building with an apse, the military barracks, the latrine and other objects were discovered inside the fort. In the central part, the remains of the principium with the portico were discovered. Outside the ramparts, it was determined that there used to be a sanctuary there, the remains of a martyrium and a part of a necropolis, as well as a part of the settlement that covered the territory westwards of the military camp. The first probing archaeological excavations began in 1964 and with certain stoppages they have been in progress until today. The researched objects have been conserved.