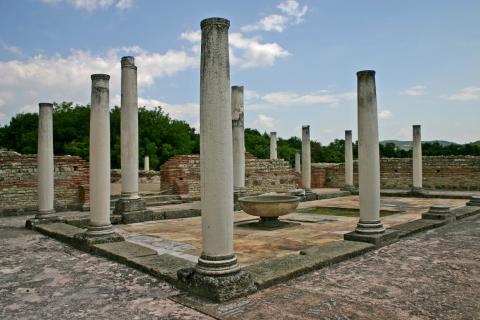 Description:
In Gamzigrad, not far away from Zaječar, a town 250 km to the east of Belgrade, there are the ruins of Felix Romuliana emperor’s residence, which Emperor Galerius built in his native place at the beginning of the IV century. The city was belted by strong walls and a large number of towers, while, within the confines of the big walls, the emperor’s palace, a big temple and other public edifices and ancillary buildings appeared. Romuliana is the most attractive monument of ancient times preserved in Serbia. Even today, the residence exudes imperial dignity. The extraordinary mosaics, frescoes and valuable sculptures account for the climax of the art of that time. The two most beautiful mosaics depicting Labyrinth and Dionysus were relocated to the National Museum in Zaječar. At the same place, sculptures are exhibited, too, including the emperor’s portrait made of porphyry. Romuliana is listed as the UNESCO world cultural heritage.
Audio record: