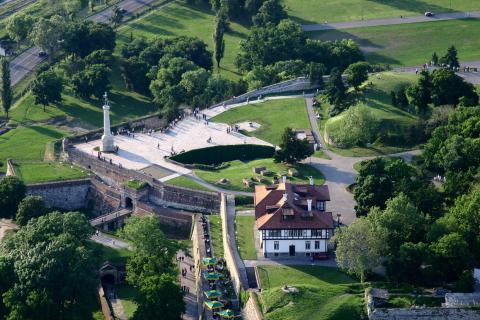 www.beogradskatvrdjava.co.rs
Description:
Belgrade Fortress acts as the centre of what today’s Belgrade now stands upon. The fact that Belgrade is a city for which the largest number of battles ever – 115 such battles were fought - testifies to the significance of the place where it was built. At the confluence of the rive Sava with the river Danube, the ancient Celtic settlement of Singidunum was first raised, only to be followed by a significant Roman fort. Later the city was ruled by the Byzantines and the Hungarians; for a while, the city belonged to Serbian King Dragutin, and for centuries, the Turks and the Austrians fought for it. Belgrade thrived at the beginning of XV century, when it was renewed by Despot Stefan Lazarević, who transformed it into a big city hosting Serbia’s new residence. The fortress complex is divided into Upper City and Lower City. In the Upper City, the thick defensive walls repeat the foundations of the Roman castrum, and the medieval Despot’s Gate with Dizdar’s Tower and the Zindan Gate, whose towers hid notorious Turkish prisons and are well preserved. The Lower City and the port had their fortification with towers. Nebojša Tower, built before XV century, protected the entrance into the medieval port. Dating from XVIII century, the Turkish Sahat Gate was preserved and highlight the Austrian masonry – the massive defensive walls made of brick and Carlo’s Gate which is decorated in the baroque style and influence. Today’s fortress, surrounded by Kalemegdan Park, has been transformed into an open-air museum and a space for many cultural events held throughout the year. In the Sentinel Building, there is the Gallery of the Natural History Museum; the Observatory is in Dizdar’s Tower, the Planetarium is in the old Turkish bathhouse, while concerts and theatrical plays are performed at the Powder-works.
Audio record: