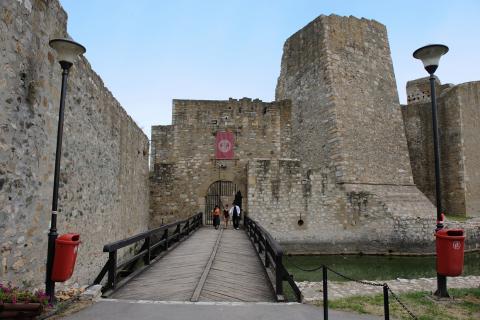 www.tvrdjava.com
Description:
At the confluence of the river Jezava with the river Danube, one of the most beautiful fortresses in Europe – Smederevo – lies. The fortress was erected by Despot Đurađ Branković as a new residence of the state fighting to survive after being confronted with strong Turkish penetrations in XV century. The colossal fortress, surrounded by water from all sides, seemed to be inconvincible; yet, in 1459, it was conquered by the Turks, which signified the end of the Serbian medieval state. The very big triangle-shaped fortified city is belted by 25 towers, standing 20 meters high and massive walls of around 10 meters in height and up to 4 meters wide. The Small City was built first, with Despot Đurađ’s court providing a ceremonial hall for audiences and the donjon-tower serving as the last shelter for the court’s nobility. A little later, the Big City was built, where military camps were deployed and where the local population lived and was fortified by colossal towers and surrounded by a moat. Today, the fortress is open for visitors and represents a space for cultural and sports events of the City of Smederevo.
Audio record: