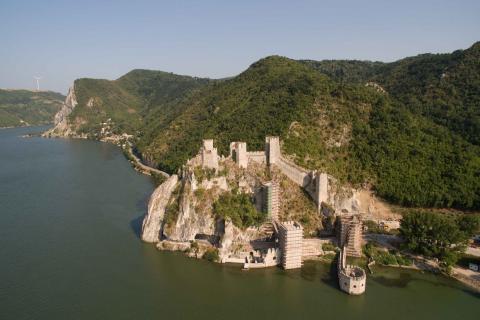 www.tvrdjavagolubackigrad.rs
Description:
Golubac is a medieval fortress errected on a sharp ridge above the Danube River, at the entrance to the Đerdap Gorge, 4 kilometers downstream from the town of the same name. Because of its important strategic position, this place was fortified early on in history, and in the times to follow the governors of the town that changed several times. The fortress as can be seen today was built in XIV century, and several times it was conquered by the Hungarians and the Serbs; the Turks ruled there the longest. Golubac is a real military fortification without outskirts. Its base is of an irregular pattern and is adapted to the steep hill from which it is perched. On the top of the rock, there is the “hat tower”, from which two rows of the massive walls with eight impressive towers in the shape of a fan slope. It was only possible to reach the town via a water trench. The octagonal tower with a platform for guns was built by the Turks on the bank of the river so as to protect the port, and in order to gain control over navigation, they linked the tower to the Babakay Rock, protruding from the water, with a chain. The town of Golubac is one of the smaller fortifications compared with Petrovaradin Fortress, Belgrade Fortress or Smederevo Fortress; however, it is a “must-see” tourist destination because of its beauty and location, being the entrance to the second largest gorge to be found in the world after the Grand Canyon.
Audio record: