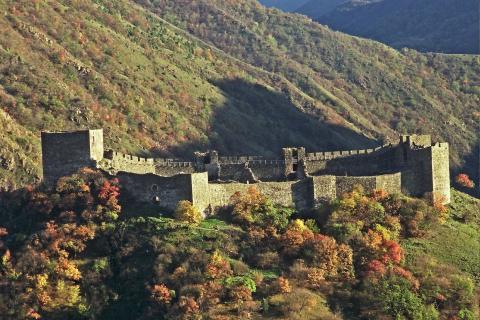 Description:
On the top of the steep cliffs in Ibar Gorge, on the way from Kraljevo to Ušće, there is a medieval town – Maglič. Many legends are associated with Maglič; however, it is not known for sure when the town was built; nor is it known who its first master was. The town is supposed to have been built in XIII century to protect the roads of Old Raška and the monasteries of Studenica and Žiča. It has been recorded that, in XIV century, Archbishop Danilo II erected new palaces and cells in the town. Maglič is one of the best-preserved and the most beautiful fortifications of the medieval Serbia period. The formation of the town follows the form of the ridge it was built on. It is belted by strong defensive walls with seven towers and a tall donjon on the eastern side. The interior of the fortress hides the preserved foundations of St. George’s Church (Crkva sv. Đorđa), the remains of a palace, a bakery and a water cistern. Even today it is not easy to access the hardly ever conquerable town of Maglič. There is a plan for the future arrangement of the fortress complex as well as to make pedestrian paths which will make Maglič a more accessible place for visitors.