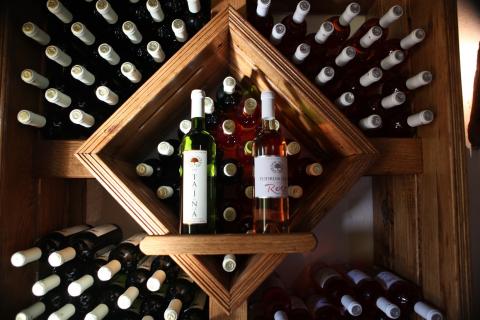 www.podrumlukic.rs
Description:
Lukić Cellar is part of the Lukić Family’s Estate in Babajić Village near Ljig, in the vicinity of Vrujci Banja and Ljig spas, 80 km away from Belgrade. Babajić Village is surrounded by the slopes of Rajac and Rudnik mountains. This whole region of Kolubara District is, among other things, known for fruit, plums in particular, growing. It is also extremely suitable for grape growing. Lukić Cellar continues the tradition of the Lukić Family’s Estate in plum brandy production that started over one century ago. Out of the family’s own 40 ha of land, 10 ha are under fruit plantations, from where fruits for brandy production are picked. The trademark of the Lukić Family’s Estate is the ten-year old brandy called DECADE (Dekada) – the coupage of the brandies made from “the early ripening ‘ranka’ plum” and the “požegača” plum. Apart from DECADE, double distilled three-year-old plum brandy – the coupage of the brandies made from “the early ripening ‘ranka’ plum”, the “požegača” and the “self-fertile plum”, as well as fruit brandies made from quinces, apricots, Williams pears, apples and vine. The vineyards of the Lukić Family Cellar cover an area of 3 ha. The chardonnay, the pinot noar, the Tamjanika and the pinot grigio sorts of vine are grown. Currently, the four sorts of wine are offered: Chardonnay, Pinot Noir, Rose and Tamjanika. Village Babajić, 14240 Ljig Tel: +381 11 361 2870 ; +381 64 151 4624 ; +381 63 313 083 office@podrumlukic.rs
Audio record: