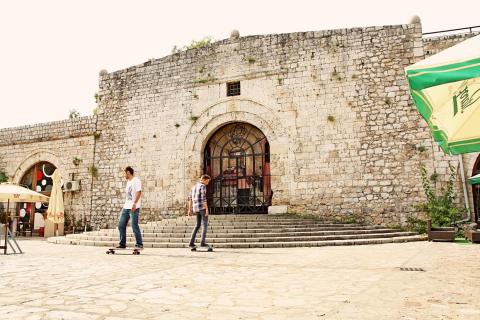 Description:
Niš Fortress, situated in the center of the city on the Nišava River bank, represents one of the best-preserved and one of the most beautiful Turkish military forts in the Middle Balkans. It was built in XVII century, on the site where earlier a Roman, then a Byzantine and finally a Serbian medieval city had stood once. The fortress of a heptagonal five-bastion shaped basis is belted by massive defensive walls. Once, the fortress was surrounded by a trench filled-up with water (moat), whose northern part is kept today, too. The main entrance is through the southern Stambol Gate, and on the other sides – through the Belgrade, Vidin and Water Gates. The hamam is the oldest preserved building dating from the Turkish times – a Turkish bathhouse from XV century. Inside the fortress, there was Pasha’s court and the Garrison Headquarters, a library, a settlement with barracks, shops, powder-works and other military buildings. Within the complex of the fortress today, there are numerous cultural and tourist contents. The Arsenal and Bali-Bey’s Mosque have been transformed into exhibition galleries, whereas the summer stage represents an important cultural centre of the city including the internationally acclaimed Nisville Jazz festival.
Audio record: