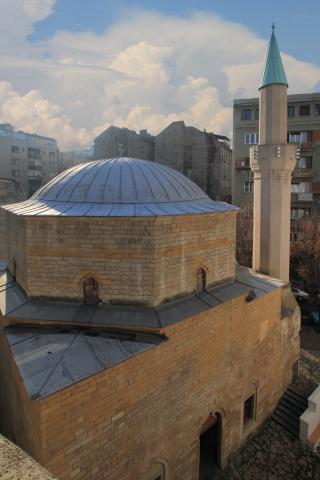 Description:
The Bajrakli Mosque in the centre of Belgrade, in Gospodar Jevremova street, got its name from the flag (Turkish, bayrak) that signalled the call to prayer to other mosques. As the endowment of Sultan Suleiman II, it is the only remaining mosque of the many that once existed in Belgrade. It was built between 1660 and 1688 and is of the type with a square floor-plan, single interior space and a dome resting on an octagonal tambour. It is built of stone, except the minaret which is brick. During its history it has been demolished or its function changed a number of times. It was originally called Čohadži Mosque, after its benefactor, a textiles (čoha) trader called Hadži-Alija. It was a structure with a single interior space, dome and minaret. During the period of Austrian rule (1717-1739) it was turned into a Catholic church. This period also saw the majority of Belgrade's mosques destroyed. Upon the return of the Turks it once again became a mosque. Hussein-bey, assistant to Turkish chief commander Ali-pasha, restored it as a place of worship in 1741 and thus for a time it was Hussein-bey's (or –beg’s) Mosque or Hussein-ćehaja's Mosque (ćehaja means assistant). After its restoration in the 19th century, which was undertaken by Serbian noblemen, it became the central city mosque. Today it is the only active Muslim place of worship in Belgrade.