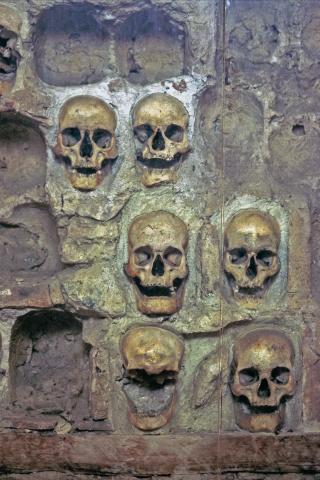 Description:
This monument, unique in the world, was built after the Battle of Cegar. In the words of “a Serbian hajji from Nis”, the Turks prepared the construction of the tower made of skulls. When Hursid Pasha of Nis realized that, even though the post at Cegar hill had been taken, the battle and the explosion resulted in 3,000 dead Serbs and at least twice that many dead Turks, he ordered that the heads of the Serb victims be collected, skinned, and that the skulls be built into the tower. The heads were stuffed with cotton and sent to Constantinople. This horrific monument was built along the road to Constantinople, as a warning to anyone rising against the Ottoman Empire. A mid 19th century written document reads that the tower was rectangular, 4.5 meters wide and 4 meters long, that on all four sides there was a total of 56 rows, with 17 skulls in each row, totaling 952 skulls. In time most skulls were taken or missing, so that today the tower has only 58 skulls. In 1938 a chapel was built around the Skull Tower to preserve it from further decay. That year, a bust of Stevan Sindjelic, made by the sculptor Stevan Miletic, was placed in the plateau in front of the tower entrance. There is also a bronze plate with the words of the well known French poet Lamartine who mentioned the monument while passing through Nis in 1833: “May the Serbs keep this monument! It will always teach their children the value of the independence of a people, showing them the real price their fathers had to pay for it.“ Address: Bulevar Dr Zorana Đinđića bb, Tel: +381 18 222 228 The Skull Tower ( Bul.Dr Zorana Đinđića), Tuesday-Friday 09.00 AM-07.00 PM, Saturday-Sunday 09.00 AM-05.00 PM, Monday : closed