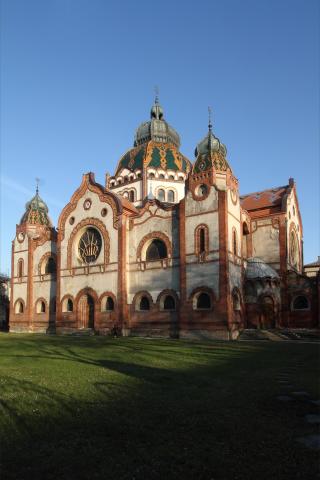 www.josu.rs
Description:
The synagogue in Subotica was built in 1902 to plans drawn up by Budapest architects Marcell Komor and Dezsö Jakab, associates of architect Ödön Lechner, forerunner of the Hungarian Secession movement. With its bold, modern architectural features and the perfect harmony of its structure and decoration, it is considered one of the most beautiful synagogues in this part of Europe. The harmonious, monumental structure, with a dome over the central section, is further enhanced by engineering innovations such as the iron structure – borne by eight iron columns – on which the dome rests. Three entrance portals lead into a narthex, above which is the women's section, while four stairways lead to the gallery. Though the influence of Lechner can be felt, together with folk art and Eastern themes, the synagogue is moderately decorated, the flat walls featuring floral and zoomorphic ornamentation only around the portals, windows and attic, while inside they emphasise elements of the structure. It is built of brick and coloured with Zsolnaj ceramics. Time of visit: opening of the restored interior of the synagogue is planned for 2018. Adreas: Trg sinagoge 2 24000 Subotica