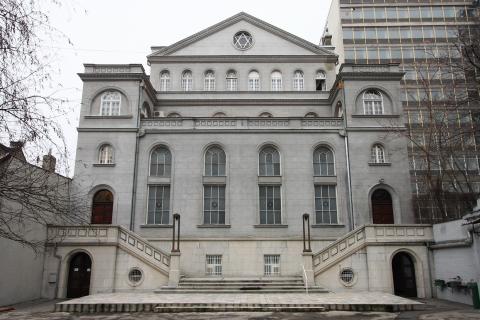 Description:
The old Belgrade Sephardic synagogue, Beth Israel, built in 1908, its foundation stone laid by King Petar I, was destroyed during the Second World War. Today’s Shukat Shalom Synagogue in Maršala Birjuzova street was built in 1925. To begin with, this synagogue, following the Ashkenazi rite, served a congregation of Yiddish-speaking Belgrade Jews. However after the Second World War it served the entire Jewish community, both Sephardic and Ashkenazi, that had survived the Holocaust and remained in Belgrade. In terms of architecture, the synagogue building is in the Late Neoclassical style – in this part of Europe usually referred to as the "academic style” – with a fenced yard in front. The synagogue building also houses the Youth Club, as well as common rooms used by the Jewish community.