Cultural and historical heritage in Bosnia and Herzegovina/Bosna i Hercegovina – E75
Photographies: 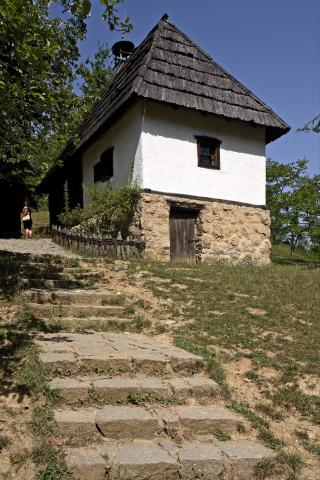 www.trsic.org
Description:
The village of Tršić is 9 km south-east of Loznica and is the birthplace Vuk Stefanović Karadžić, creator of the modern Serbian Cyrillic alphabet. The village comprises an ethnographic park with memorial house, examples of folk architecture and visitor facilities. In creating the ethnic village, special care was taken to permanently record and safeguard the memory of Vuk and his work, as well as preserve the natural environment and features of the area. In 1933 a memorial house was raised on the spot where the family home of Vuk Karadžić stood – a two-part log cabin with cellar and a steep roof covered in wood shingles. In 1964, to mark the 100th anniversary of Vuk’s death, an amphitheatre with stage was built, to be used for staging the Vuk’s Gathering (Vukov Sabor) and Vuk’s Gathering for Children, and in 1987 work on Tršić was completed so that it could serve as a cultural and historical monument in its entirety.
Audio record: