The “Old Village” Museum in the open air in Sirogojno 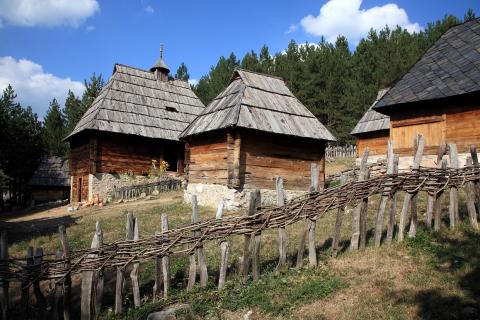 www.sirogojno.rs
Description:
The “Old Village” Museum in the open air in Sirogojno is an example of traditional architecture, a way of living and dwelling in the territory of Zlatibor mountain region. The construction of the Museum started in 1980 by transferring the authentic objects of folk architecture to the location in the vicinity of the church dedicated to St. Apostles Peter and Paul. The Museum whole, together with the church, is under protection and by a decision it has been declared as a cultural good of exceptional significance for the Republic of Serbia. The Museum setting consists of the two authentic Zlatibor mountain house lots, a garden with the residential and economy buildings, resembling those in which cooperative village families lived in the second half of the 19th and in the early 20th centuries. Each house lot contains one typical Zlatibor mountain two-part house, whose characteristic features classify it into the Dinaric log-house type. The Dinaric log house is built on a sloping land. Its basis is rectangular in shape and the walls are made of horizontally layered logs, in the corners angularly connected. Its foundations lean against the stone underpinning wall. The log house’s roof is high and precipitous, covered with shides. Next to the house, there are the outbuildings, in which married couples of the cooperative family slept. The number of outbuildings inside the house lot varied, depending on the size of the cooperative, i.e. on the number of the married members of the cooperative. In the households, there is a dairy – an ancillary building where cheese and kaymak milk spreads are made and stored; a granary – where gains are stored; a corn crib – corn farm, a tun house with a brandy still; an oven for bread baking; a beehive house and the house for drying fruits; a stable – for the cattle and a hog house. The summer cattle dwelling consists of the two cottages, in which shepherds lived from the spring to the autumn, and a movable small house known as “kućera”, a bed on the sleighs for the shepherd, which can be moved from one place to another so that the shepherd could be in the immediate vicinity of his cattle. Nearby the cottages, the so called “kulača” – a primitive cone-shaped dwelling for cattlemen – has been reconstructed. At the museum, there are also exhibitions of the three craft workshops: the cask-making (where small casks, wooden buckets and tubs, small barrels and tuns are made), the pottery-making (where earthen vessels are made on the hand wheel) and the ironsmith’s workshop. The buildings in the museum setting are equipped with original houseware, cookware, devices, gadgets, instruments and tools. The tens of also original buildings have partly been reworked and adapted to the museum’s different needs and programs. The Hall, the Summer Stage, The Shop Selling Products of Old Crafts and Herbal Products, the Inn and the Accommodation Residences (Log-Houses). The Museum pays great attention to the preservation of the intangible cultural heritage through the reconstructions of certain folk customs and the revival of old crafts. The Museum organizes exhibitions, events, festivals, concerts, workshops, seminars, conferences and so on in order to preserve and protect the tangible and intangible culture of this region. The Museum is open throughout the year, from 9 am to 7 pm (and to 4 pm from November 1 to April 1). For more information, please call: +381 31 3802-291, +381 31 3802-586, +381 64 89-40-101, +381 63 643-758 e-mail: staroselo@ptt.rs
Audio record: