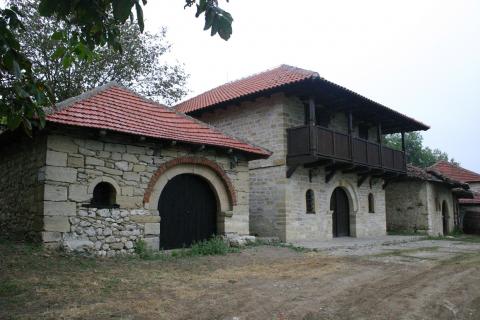 Description:
The economy of the village estate of Negotinska Krajina (Negotin Town Region) based on the winegrowing hills conditioned its organization as a rugged whole in the past. The seasonal or temporary settlements were built in the vicinity of the places of residence. These winegrowing settlements were created for the reason that houses were more modest, deprived of a sufficient space for storing wine, and it was easier to store wine in remoted cellars if such cellars were grouped. Pimnice cellars, as the specific settlements in which only wine is stored, were being built in the period from the 17th all the way to the first decades of the 20th century, although there are indirect indications that they had been built even earlier in the past. Such settlements were being constructed from natural carved stone and wood, namely logs, and were all accessed by road and had narrow alleys between the houses. In the Pimnice cellars themselves there is a cellar dug in the earth up to the depth of 1 m so as to enable the keeping of the constant temperature of the air. In them, about 5000 to 6000 liters of wine are stored. Also, there are even parts where tools, wine vessels and so forth are stored. During tourists’ visits to these very interesting localities, tourists have an opportunity to taste wines and purchase them. The first reliable mentioning of the Pimnice Cellars of Negotin dates back in the mid-19th century, when they were marked as the villages without chimneys, i.e. as the uninhabited habitats. Late in the 19th century, and from the first half of the 20th century, during picking and producing wine, they were even more significant than the village itself. It was being said that the pivnica cellar was for the village what a bazaar was for a town. Especially expressive and beautiful are the stone-built pimnice cellars of the villages of Rajac and Rogljevo, as well as those of Štubik village. Rajačke Pimnice cellars are located not far away from the village of the same name, on the hillock nearby the Timok River. They have a form of a cramped group of 270 pivnica cellars built around the central square with a fountain. The curving alleys with smaller squares branch from the square. The Pivnice cellars were built of stone, covered with clinkers and partly dug in the earth. Each has got two entrances, the one across the other, at two levels, or a window where there is no other door, through which a wooden gutter is placed, called “gurma”, for pouring grapes into the tub. The oldest cellars, as well as the nearby tombstones, were carved by the masters from the south, of whom one signed himself as “Master Kosta of Macedonia”. The Rogljevo village Pivnice cellars include about 150 pivnice cellars, the majority of which was built in the 19th century, although they are considered to have been built as early as in the 18th century, as is the case with the other settlements. As a spontaneously created settlement, formed by irregular alley routes, with a central plateau with an inscription and the roofed well as the place of culture in which people gathered, the Rogljevo Village Pivnice cellars are characterized by all features of a rural whole. Until the Second World War, there had been two bakeries and three butcher’s shops, of which one worked, whereas there had been none in the village. The Štubik Village Pimnice cellars are located not far away from the Monastery of Bukovo, 5 km away from Negotin town and 15 km away from the village of the same name. Apart from their basic purpose, their owners also used them as a place to sleep the night in when they were going to Negotin on a market day. There were about 400 Pimnice cellars, some of them owned by the inhabitants from other villages, and only 39 of them have been preserved. The remains of an inn and a butcher’s shop were found, which speaks of their significance. Differently from the Pimnice cellars of Rajac and Rogljevo, the Štubik Village Pimnice cellars were constructed as ground-floor wooden buildings with a porch, which are unpreserved and have no floors, whose cellars were built of broken stone, and the floor i.e. residential part were made of wattle and daub with the clinker roof. The latter (Pimnice cellars) were originally built by the masters from the mountainous settlement of Crna Trava (Black Grass) and later by local masters as well. Negotin town is characterized by a long-lasting tradition of growing vine and winemaking. It had been grown as early as in the time of the Romans, and became increasingly significant during the 19th century, when the majority of the European vineyards were attacked by phylloxera. The vine of Krajina was protected from that because it was grown on loose wet sand. Since then, this wine started being more intensively exported to all European countries, and in London in 1921, this wine was awarded a golden medal.
Audio record: