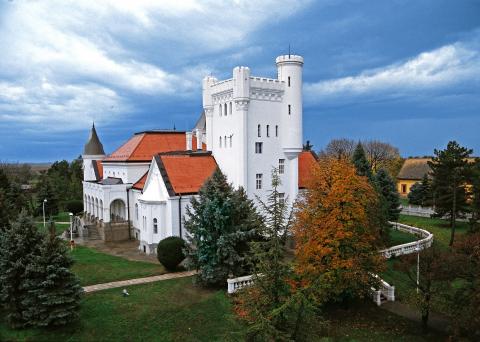 Description:
The manor-house known as Fantast is around 14 km from Bečej on the road to Bačka Topola, in the central part of Vojvodina . It is 60 km from Novi Sad and 135 km from Belgrade. The complex as a whole is 65 hectares in area and includes the house, a small watch-tower, the chapel to Saint George, a stud-farm for race-horses and the park. The house was built by well-known Vojvodina landowner Bogdan Dunđerski, who owned around 1500 hectares of land between the towns of Srbobran and Bečej. It is said that he built the magnificent house purely out of obstinacy, to show that he was not bankrupt. When it was built, the manor-house reflected all the power and wealth of its owner, who never married and had three great passions: women, horses and wine. Bogdan Dunđerski was friends with the renowned painter Uroš Predić, and when he decided to build the chapel to St George on his estate, in the Neobyzantine style, it was Predić who was entrusted with the job of painting the iconostasis. Built in the period from 1919 to 1920 it represents a blend of a variety of new styles atypical of this region. The stables are among the best-known in this part of Europe and the most renowned steeds in the former Yugoslavia were bred here. The stud-farm once occupied more than half of the entire estate and numbered some 1400 thoroughbreds. Today there are around 80 horses in six stables, as well as a race-horse training track. There is a riding school and horses can also be rented to tourists. The complex also comprises a park, harbouring a diverse variety of tree species and well-tended paths. In 1983 the house was converted to a hotel. It was named after Fantast, the finest horse ever to come from the stables of Bogdan Dunđerski. Besides the hotel, visitors can use the tennis courts and there is also a landing field for small aircraft.