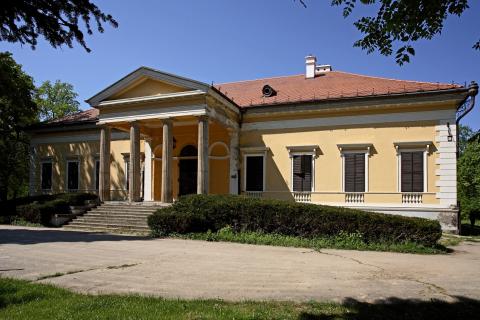 Description:
The compound consists of several buildings located in a spacious park, organized on the example of English gardens, on the squire’s estate formed in the second half of the 18th century. The smaller castle was built by Marfi Lipot at transition from the 18th to the 19th century, and nobleman Nikola Bezeredi lived there with his family. Bezeredi decided to build the Big Castle, which was built according to the plans made by an unknown Viennese architect between 1834 and 1837. Although the building itself was declared a castle, it actually exclusively served as a summerhouse to Nikola Bezeredi, who had in his possession the houses in Vienna and Budapest, as a classical example of the representative sipahi residence, whose representativeness is made complete by the features of its classicistic style, decorative details, the richness of its decoration, the distribution of the rooms, the way its interiority is made and equipped. Little is known about how the interiority of the castle looked after construction, but some writings state that the edifice had been fresco painted before it was ultimately sold to squire Laza Dundjerski in 1882. The park itself, which was constantly being expanded, had always distinguished itself for its beauty, so much that it was broadly being spoken about throughout Hungary. From the end of the 19th century all the way to the First World War, it was the place where distinguished and significant political and cultural figures of that time met, and was being visited, among others, by Nikola Tesla, Paja Jovanović, Stevan Todorović and Laza Kostić, who wrote the most beautiful love poem “Santa Maria della Salute” in the honor of Lenka Dundjerski, who he met at this castle; Alexander Karadjordjević also resided at the castle for a while. After the Second World War, from 1947 to 1952, the castle with the accompanying buildings belonged to the then Presidency of the Government of the FPRY. At that time, President Josip Broz Tito would reside in the edifice from time to time. The castle is a monument of culture of exceptional significance.