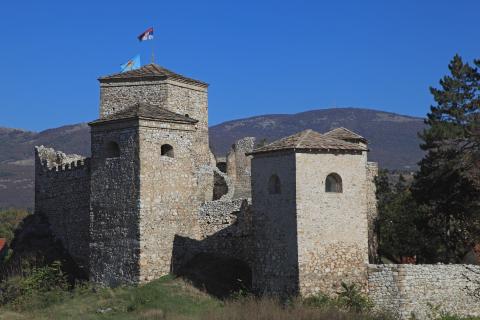 Description:
Inside the town centre of contemporary Pirot, lies the Kale Fortress, known amongst many people as Momčilov grad (Momčilo’s Town). According to the tradition, the town was built by the famous Rhodope aristocrat Momčilo, but most probably, the fortress was built by Prince Lazar in XIV century, on the site of an older Roman fort, as a strategic point in defending the town from the Turkish invasion. This region was on the main trade and military route through which the Istanbul road passed. The town of Pirot represents a smaller-sized military fort strengthened by the towers and consists of two compounds. The Upper Town was raised on a high rock behind the Bistrica River, just slightly far away from its confluence with the Nišava River. On the very top of the rock, a tall donjon tower with a view of the broad Pirot field was errected. The Lower Town was belted by a brick-made trench and strong defensive walls with towers. Today, the fortress is open for visitors; however, the town of Pirot is making a big effort to reinvent itself with a programme of fundamental reconstruction. By opening new spaces for museums and exhibitions and by building the replicas of old Pirot houses, the fortress is becoming the cultural centre of the town.