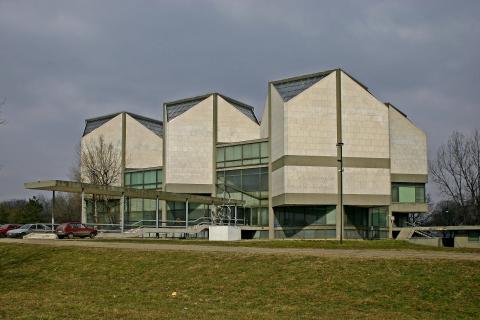 www.msub.org.rs
Description:
Since its foundation in 1965, the Museum of Contemporary Art has based its display policy on the representation of the most relevant artists, periods, movements and tendencies in Yugoslav, Serbian and international art of the 20th century. Furthermore, the Museum held a respectable position on the map of European and international museums of modern and contemporary art, which enabled it to intensely cooperate with relevant foreign museums, galleries, collections, curators and critics. The Museum also takes an active role in the promotion of local art abroad, and has often had the opportunity to organize the appearance of domestic artists at international biennials and triennials (Venice, Sao Paolo, Paris etc.). Staying in sync with contemporary museological principles of the conservation of cultural heritage and the politics of display, the Museum today represents a dynamic institution which by the scope and diversity of its program, by its research and pedagogical work, its intensive international collaboration and openness to diverse modes of cultural activity and cooperation, stands for an important factor of the cultural and art life of Belgrade and Serbia. The Museum of Contemporary Art was closed for public in 2007 due to the adaptation, reconstruction and extension of its building at Ušće. The project was devised so as to integrate current approaches in designing sophisticated systems of museum technology, first and foremost concerning the microclimatic optimisations of the building itself. The first phase of the reconstruction, adaptation and extension was partly completed in 2010. It involved fixing the roof, basement facilities (depot, workshops, conservation-restoration ateliers and technical maintenance unit), as well as the dislocation of the energy supply unit (electrical substation) from the Museum’s basement into a brand new facility. The next phase of the reconstruction started in August 2015, will bring about the complete interior remake, the setting up of the new electric wiring, and the refurbishment of the Museum’s façade. End of reconstracton and opening of the building is planned in autuman 2017. Salon of the Museum of Contemporary Art 14 Pariska St., Belgrade phone: +381 11 2630 940 Working hours: from 12:00 to 20:00, except Tuesdays Admission is free of charge The Salon of the Museum of Contemporary Art in Belgrade was inaugurated in the Spring of 1961 at 14 Pariska St. under the name of Modern Gallery. It started off four years before the Museum of Contemporary Art at Ušće was opened. It was the first gallery in Belgrade with permanent exhibition activity and clearly defined conception. The Salon’s exhibition practice was at all times centred on younger artists and the latest tendencies in the art-world, as well as on presenting the work of prominent foreign artists. Almost all major visual artists from former Yugoslavia had the opportunity to show their work to the Belgrade audience in a solo exhibition. The concept behind the Salon of the MoCAB still revolves around presenting the most up-to-date currents in visual arts, most of all through solo exhibitions of contemporary artists, national and foreign, but also through organised presentations, panel discussions and lectures. Besides, the Salon is opened for theme-centred exhibitions authored by curators concerned with contemporary tendencies who are given the opportunity to have their projects realised. Thus, the Salon maintains its role of the most prestigious exhibiting space in Belgrade, and at the same time occupies a thriving position on the global scene.