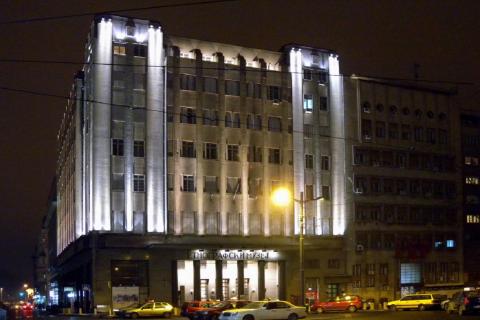 www.etnografskimuzej.rs
Description:
The Ethnographic Museum in Belgrade was established in 1901 by the separation of the Ethnographic Department from the system of the National Museum. The proposal and the preliminary, initial theoretical basis and framework for the establishment of a museum in which folk life would be studied was produced by historian Stojan Novaković, a full member of the Serbian Learned Society (presently the Serbian Academy of Sciences and Arts). Various ethnographic objects, including some earthenware and metal vessels, jewelry, amulets, glass and textile items, weapons, tools, Easter eggs and other museum items were transferred to the Foundation of Stevča Mihajlović – the house that Mihajlović bequeathed by his will “to the Serbian nation” for his “eternal memory for the purpose of converting it into a museum for the Serbian Kingdom”. Sima Trojanović, PhD, was appointed as the guardian (director) of the museum, whereas Nikola Zega was subsequently appointed as its first curator. The inauguration of the first permanent exhibition of the Ethnographic Museum was organized on 20th September 1904, on the occasion of the celebration of the centennial of the First Serbian Insurrection. During the first years of its work, the Ethnographic Museum focused its activities on the purchase of museum items and the presentation of the Kingdom of Serbia abroad. The items to be included in the museum collections were being collected in field research throughout the then territory of Serbia and the neighboring countries in which the Serbs also lived. During the First World War, a great number of museum items were destroyed, including the documentation and the Library. In the postwar time, new field research campaigns were undertaken with the aim of filling the gaps in the collections. Guest exhibitions in foreign countries were being organized less frequently in those years. The museum library was re-established in 1920. Today, its holdings contain about 60,000 publications, among which there are 33,000 books and about 27,000 journals in the field of ethnology, anthropology and related scholarly disciplines. In the years between the two world wars, the New Inventory and the Alphabetical Catalogue of all museum objects were compiled, on the one hand, and the Department of Musical Folklore and the Department of Illustration were established, on the other, whereas the museum objects were categorized according to the materials they had been made from. During the Second World War, the museum objects were packed and removed from the building the museum had been housed until then. Once the war had ended, the museum was relocated to the Belgrade Stock Exchange building at 13 Studentski Trg (Students’ Square). In the museum collections today, about 200,000 museum items, among which over 56,000 are ethnographic objects, are preserved. Since its establishment until today, the museum has dedicatedly been engaged in the professional collecting and studying of the museum objects and the ethnogenetic processes, traditional material culture, social relations and family life, customs, beliefs and folklore. The features of the Serbian culture, as well as those of other ethnic groups living in the neighboring countries, have also been the subject-matter of study. Apart from collecting artefacts (exhibits), since the 1960s, team research in the ethnographic areas of northeastern and western Serbia has been introduced as the Museum’s permanent activity. Research results are published in professional and academic scientific journals and catalogues. Temporary and permanent exhibitions are organized at the Belgrade Ethnographic Museum. So far, eight permanent and several hundred temporary exhibitions have been organized in the country and abroad. The eighth permanent exhibition entitled “The Folk Culture of the Serbs in the 19th and the 20th Centuries” was set up in 2001. Over the past twenty-two years, the International Festival of Ethnographic Film has also been included in the Museum’s regular program. The museum also organizes workshops for children and adults, lectures, book presentations and concerts. WORK HOURS Tuesday – Saturday, from 10 am to 5 pm Sunday, from 9 am to 2 pm The Museum is closed on Mondays.