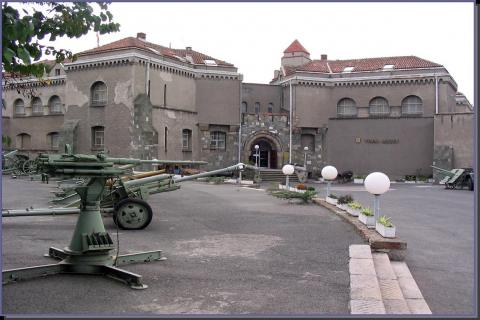 www.muzej.mod.gov.rs
Description:
Military Museum is positioned on bastion of the 1st south-eastern front of Belgrade Fortress in a building built in 1924 for purposes of Military-Geographical Institute. In 1956 the building was given to Military Museum. Surrounded by fortress` ramparts and most beautiful Belgrade Park, Kalemegdan, Museum represents one of the symbols of Belgrade Fortress. It was founded by the Decree of Prince Milan Obrenović IV on August 22nd 1878 on preposition of Minister of Army, colonel Sava Grujić. It was yet another manifestation of celebrating Serbia`s Independence. First permanent display was opened in 1904 according to 100th Anniversary of First Serbian Uprising and as a part of King Petar`s Coronation Ceremonies. Museum was then placed in a humble building from Turkish period, just beside the Roman Well. Soon after the foundation, Museum has entered the Europe by participating on the Balkan Expo in London in 1907. There, with around 100 carefully chosen objects, Museum had attracted the attention of London public and it was described in local newspapers. Museum’s building was demolished in First World War, and collections were mostly destroyed or were seized by occupation troops. Again more than two decades had past before the new Display has been opened. King Aleksandar I Karadjordjević issued a Decree of Founding the Military Museum in Kingdom of Yugoslavia. Brigadier Vojislav Vuković, majordom of Royal Court became a director of Military Museum. Systematical collecting of objects started and numerous donors, former soldiers and their descendants responded. Their names were signed in a special „Golden Book“, work of a famous Russian artist Vsevolod Guljevič. The book is still being kept in the Military Museum. New permanent Display was opened in 1937 in two buildings of which one is today a residence of City Bureau for Preserving of Monuments. During the Second World War collections suffered new devastation. However, according to the program of occupation troops, some cultural institutions with military Museum among them continued their work during the occupation. Collecting of objects and their preserving was main care for museum staff. Allied bombing of Belgrade in 1944 brought new destroying of museum buildings and collections. In new conditions, after the Second World War, new work on collecting objects started, especially from the previous war. Also adaptation of Display began in accordance to new ideology. Museum collections were significantly enriched, especially with objects from War and Revolution, and Military Museum became an important institution of new country. Great attention was given to acquisitions, expert personnel, researching, archaeological excavations and preparing of new display in which beside museum experts, many prominent historians, archaeologists, architects and various artists participated. New display was opened in 1961 by president Josip Broz Tito. All important foreign delegations in Yugoslavia were guests of Military Museum. Museum organized large number of various exhibitions; edited several memorial complexes and commemorative rooms; issued several monographies, catalogues and other publications. Museum participated in symposiums and similar conferences I country and abroad. Special attention is given to acquisition of new objects and forming of collections. Today, Museum has around 30.000 objects in 12 collections and very impressive photo collection with over 100.000 photographs. Museum has special library with over 15.000 titles from areas of History, History of Art, Archaeology, Museology and other similar branches of Science and with more than 5000 magazines. ADRESS: Military Museum Kalemegdan bb 11000, Belgrade Serbia Phone:+381 11 33-43-441 Fax:+381 11 33 - 44 - 915 e-mail: vojnimuzej@mod.gov.rs Working hours of the museum staff: 07.30 - 15.30h. Permanent Exhibition: For visitors, every day except Monday 10 - 17h. Library: Monday, Wednesday and Friday 10 - 13h.